My visit home, Turkey Day, and Lots of Pictures

Once again, this blog will be mostly pictures…but I will also try to fill you all in on some of what’s happened since I last posted. I’ll start with volleyball…

We’re still undefeated! We’ve only dropped one set so far; it was to the second place team in our pool. We have another match this weekend against the team in 4th place. It’s an away game, so we’re leaving at 7am :/ The weekend after that will be our last match before we break for Christmas/New Years. It’s a French Cup match against a team that is supposed to be pretty good…we’re picked to lose! So hopefully we can pull an upset and end the year on a high note.

I finally got my visa! I can legally stay in France now! Woo hoo! The process of getting a visa was long, confusing, involved excessive amounts of paperwork and one very long trip to the French consulate in Los Angeles. The only bright side to dropping my passport off at the consulate was that I got an unexpected trip home to see my friends and family.

On November 11 I flew from Paris to London, then took a flight from London to Phoenix. In an attempt to get myself on the correct time zone, I chose to stay awake for the entire trip. It was a horrible idea. I went to bed at 11:30pm Phoenix time (730am Paris time) and managed to get a whole 4 hours in before finding myself wide-awake. The next day morning I took care of some last minute paperwork for the visa, and then drove 7 hours to Los Angeles. I ended up staying at my Uncle Brian’s house. It was perfect because it meant I got a chance to see my cousins Liz, Frank, and Erin (and Liz’s new baby boy)!

The next morning Erin and I drove 2 hours to the French Consulate. Erin joined me so that I could take advantage of the carpool lane and hopefully avoid the LA traffic. Unfortunately, I didn’t check what route my GPS chose…we ended up driving through neighborhoods, over a mountain (literally…), and never once got to use a carpool lane! I did arrive on time though, so no harm done. I handed over my paperwork and passport and was told to expect my passport in the mail sometime between 10-14 days. My flight was booked for the night of the 14th day, so I was praying that their estimates were accurate! Erin and I drove back to Valencia, where we met up with my Aunt Tina and Liz for lunch. After lunch I said goodbye to everyone, then hit the road for another 7-hour drive.

I arrive home from LA about 11pm and went straight to bed because I had another long day of travel ahead of me. The next morning I left Phoenix at 9:30 and headed for Tucson. I had lunch with my dad’s side of the family at Smashburger. Unfortunately, I had to catch a flight to Denver that night, so I was only able to stay for two hours before turning right back around and driving back to Phoenix. I had a quick two-hour flight to Denver, where I met up with my sister.

The next morning I woke up at 5 and was at the gym by 5:30 so that I could see my friends and get a workout in before I left town again. After Kelly got off work, her boyfriend drove us to the airport. I had two United Club passes, so we killed time in the airport eating all the free snacks we could handle. We ended up being late to board our plane because we were enjoying the free snacks so much that we didn’t want to leave. We had a two-hour flight to Kansas City and then an hour drive to Burlington, Kansas. My parents recently took contractor positions at the Nuclear power plant there, so they will be living in Kansas for the next two years.

We spent the weekend soaking in all that Burlinton had to offer…we saw a dam, went to the local swap meet, and visited the Shopco (which my mom could not stop talking about). The highlight of the weekend was when we bought a Christmas tree, then forgot to load it in the car. We didn’t remember until a few hours later, but were able to track it down. On Sunday night we drove back to Kansas City and flew back to Denver.

My last night in Denver was awful. I made plans to go out to dinner with friends, but an hour before we were supposed to meet up my stomach started to hurt pretty badly. Since it was my last night in town I didn’t want to cancel…I wouldn’t see everyone for another 7 months, so I figured I could just tough it out. About an hour after we go to the restaurant I started throwing up and it continued for the rest of the night. The next day I woke up and was feeling better so I went to workout. I ended up getting a PR for power clean (190#!) and then went home to pack. As soon as I got home my stomach started hurting again, which made me nervous, as I had 15 hours of travelling ahead of me.

The flight from Denver to London ended up being halfway empty, so I had an entire row to myself! I took some medicine and laid down for the entire flight. After I landed in Paris one of the representatives picked me up from the airport. He told me that my team wasn’t practicing that night, but that my coach wanted me to go to the gym to “work off the jet lag” that night. I went home and tried to nap a little bit, but before I knew it, it was 8:30pm and I was at the gym practicing.

That Saturday was my Thanksgiving! Christy, her husband Marc, her American friend Amanda, and I made plans to cook a thanksgiving dinner for a French couple that Christy and Marc knew. It didn’t go quite as well as I had hoped.

Before I left the US I was assigned the pecan pie, which calls for Karo syrup. I forgot the bottle in the US and consequently was forced to make it from scratch. My homemade Karo syrup was basically sugar-water. Amazingly enough, the sugar-water filling was probably the best part of that pie. Because Amanda and I weren’t able to find pre-made dough at the grocery store, I also made the crust from scratch. The recipe that I found online called for butter, but Christy didn’t have any…so I figured I could substitute with vegetable oil…but she didn’t have any regular vegetable oil either…so I ended up using olive oil. The third problem with the pecan pie was that we didn’t have enough pecans for the pie, so it ended up being a pecan/walnut pie. In hindsight, that really wasn’t a problem. Walnuts are delicious.

Our Thanksgiving menu ended up being:
Friend cauliflower and zucchini made by Marc
Mashed potatoes and corn made by Christy
Roasted duck provided by the French couple
Stuffing made by Amanda (it had sausage and apples in it…so delicious)
Pumpkin pie (the crust for this one turned out slightly better…I found canola oil)
Pecan/Walnut pie

The pecan/walnut pie ended up being awful. I took one bite and had to force myself to swallow it. The recipe called for 3 eggs, which in my opinion was 3 eggs too many. It ended up tasting like a pecan pie omelet. Yuck.

After a fun Thanksgiving night I caught a train from Paris back to Melun to rest up for my match the next day.

The only other exciting thing that’s happened since I’ve been back was an allergic reaction I had two days ago. I think it was a reaction to fish oil pills (although I’m not 100% sure). I ended up breaking out in really bad hives and had to sleep with my windows open because the cold air was the only thing that made my skin feel better. Luckily the bumps were almost completely gone the next morning when I woke up. That night though, my face swelled up and I had to go to a practice with a puffy, red, face.
I’ll try to put up another post of other things that have happened in the past two months…but until then, here’s all the pictures that I’ve taken on my iPod! 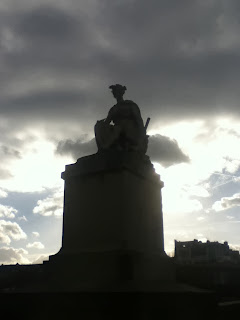